The North American Handmade Bicycle Show is an annual showcase of the most beautiful and creative bespoke bicycles. Originally planned for the spring, the show has had to be canceled this year due to the Covid-19 pandemic. But it would be a shame not to be able to show off all the bikes in one form or another, so we’re bringing the show that would have been online. Blake Young has been a fan of bikes and motorcycles since he started racing BMX at age 3. Before shifting his focus to making frames, the now 36-yearold builder was a professional 3D product designer doing work for Caterpillar and other agriculture and mining companies. Now his focus is Stein&Fenton and its gorgeous titanium F1 and MX1 models. All bikes are hand built in central Illinois and come with a lifetime warranty. Note that their bikes are only available as complete builds with SRAM Red AXS, including power meters. Inspired by the idea that wood could make for a better and more unique ride by reducing shock and vibration for the rider, Chris Kudla created Normal Bicycles in the basement of a 140-year-old house in Buffalo, New York—naming the company after the street it was created on. Kudla and Jessica Vreeswijk Kudla work together to engineer and build bikes through a process that promotes local sourcing, values history and fosters sustainability. Now based in Vashon, Washington, Chris continues to produce high-performance hardwood frames and accessories, as well as DIY wood bikeframe-building kits. In 2018, Normal Bicycles won the People’s Choice Award at the Philly Bike Expo. Based in Jacksonville, Florida, Emory Bicycles offers a bearing platform available in no other bike line in the world. All moving parts on its cruiser bicycles, such as the hub, bottom bracket and fork steerer, have independent seals and tapered roller bearings usually found in cars and motorcycles. And the frame, fork, handlebars, fittings, hubs, seat post, wheels and even the seat are made in Jacksonville, making over 90 percent of the bike American made. All its bikes are bespoke and are available in four frame materials: steel, chromoly, stainless steel and titanium. And for those not into cruisers that are over-engineered and built for life, the brand is introducing its CityBike later in the year. 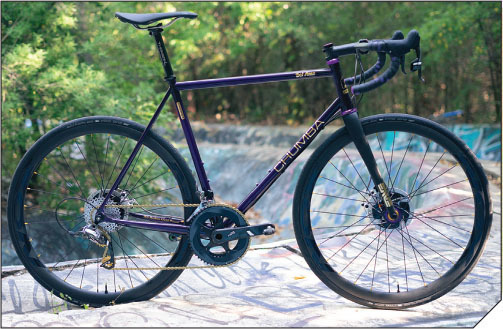 Chumba’s customers have been asking for an all-day training and race-ready road frame for some time now. Enter the Del Amo. Built of smooth and incredibly light Columbus Spirit tubing with Paragon Machine Works frame components, these frames are built one at a time in Austin, Texas, with the highest standard of quality control. Chumba’s goal was to create a customizable, compatible and sexy steel road bike with a modern geometry focused on power transfer. And with six sizes to choose from, this frame offers a wide range of rider fits. If you’re looking to put the soul back into your road riding, the Del Amo has you covered for a lifetime. The DropKicker is new to the Olivetti line as of Grinduro 2019, an event at which Peter Olivetti was given the opportunity to build a bike from the ground up. A true drop-bar mountain bike had been a real curiosity for him for a while—he had seen plenty of different compromises in these builds, none seemed quite right. So, the Boulder, Colorado, craftsman set out to build a design that considered full-fledged suspension, a forward geometry and, of course, drop bars. The Oddity fork is custom spec’d to be corrected for a 110mm Fox Float 34, and it sports 29×2.8-inch Teravail tires fitted to Enve’s 640 rim and Super-Boost and Boost hubs. Olivetti TIG-welded steel frames start at $1,900. This frame and fork feature additional paint and cost The Wilbur & Orville Collection bicycles from the Wright Brothers Cycle Company are built for every road, no matter your path—asphalt, concrete, crushed limestone or dirt. In their soon-to-be-famous bicycle shop, the Wright brothers built their top-of-the-line Van Cleve model, named after the Van Cleves, ancestors of the Wrights, who had been among Dayton, Ohio’s first settlers. Assembled on the same city block where the brothers built their bicycles—and later kites, gliders and airplanes—the Wright Brothers Van Cleve 1896 Alfine 11 built-to-order bicycle features a belt drive, 11-speed internal rear hub and front and rear disc brakes. This bike is inspired by the meticulous craft that went into the original model, and royalties benefit the Wright Brothers Family Foundation. Inspired by the rolling Quebec terrain outside of Montreal, where T-Lab Bikes is based, the R3 Omni blazes a path between a premium road racer and a bulletproof gravel bike while accommodating up to 35c tires. The performance advantage is rooted in T-Lab’s T-Morph technology, a proprietary, coldworked titanium-shaping process that produces an exceptionally profiled frame that delivers 30-percent more lateral stiffness versus leading round-tube Ti frames. T-Lab accomplishes all this while preserving the ride vivacity and comfort that titanium is renowned for.

A version of this article originally appeared in issue 94. Get your copy here.