Three days of cycling through ancient Etruscan areas fill you with emotion and reward you for your efforts. I’ve lived in Italy for 45 years but I’d never heard about Tuscia Viterbese, Maremma Laziale or the Via Clodia. It’s hard to believe, but maybe in a land so rich in history and beautiful landscapes it is difficult to know them all, and it’s always good to have new lands to discover. So you can imagine how excited I was when I found an ancient route completely unknown to me.

The Via Clodia is an old Roman road built on previous Etruscan traces between the Via Aurelia to the west and Via Cassia to the east. It connected Rome with the Etruscan lands and was used primarily for commercial purposes rather than the military priorities of the other two north-to-south routes. 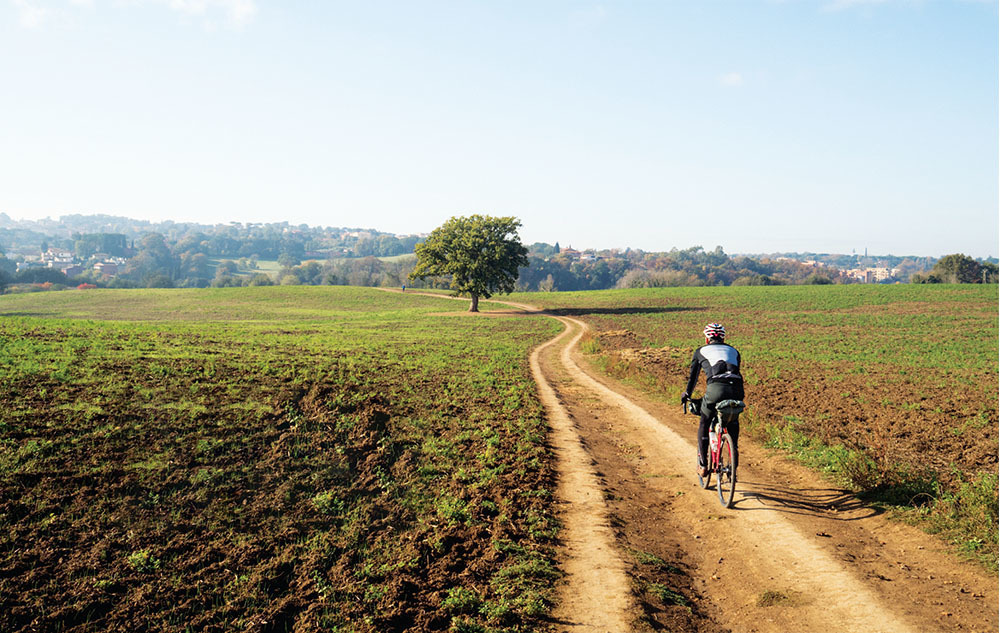 The territory that we covered between Rome and Grosseto connects the upper Lazio region (Tuscia Viterbese and Maremma Laziale) with southern Tuscany. The route runs entirely inland with 30 percent on asphalt roads and the remaining 70 percent of gravel and undergrowth—we completed some passages with bikes on our shoulders.

The complete Via Clodia no longer exists. Through the centuries, it’s been covered by asphalt, private properties, bridges and cultivated fields; and only short sections remain. To orientate ourselves and set our GPS navigator we did some research on the website anticaviaclodia.it. Even so, we often had to deviate from the original track, lengthening the expected mileage, something that often happens when trying to retrace ancient routes erased by time.

The terrain we crossed was beautiful and various—villages atop steep hills; rolling countryside rich with woods and pastures; and Etruscan caves, baths and burial grounds. These ancient landscapes, both fairytale like and disquieting, remain fortunately far from mass tourism. Our gravel bikes were perfect except for those places where we had to lift the bikes to climb over gates or cross obstacles, practicing healthy portages. The Vie Cave (or cave roads) are not completely practicable by bike, while some sections in the woods were also impassable. In the three days, we covered 300 kilometers and amassed around 4,000 meters of climbing.

It’s not easy to follow ancient routes now hidden by time and history, but it’s very exciting to discover places created hundreds of years ago in this “minor” part of Italy that’s so full of hidden wonders.

This story originally appeared in issue 82.

Also check out Looking Up in Ethiopia