IT’S ALL ABOUT PASSION

Philippe Gilbert may not win the most races in a season, but he wins the biggest ones. A master tactician, Gilbert’s style defines the science of racing. He knows how to prepare perfectly for an objective, something that has allowed him to win races as different as Paris–Roubaix and the Tour of Lombardy. He has won four of cycling’s monuments. Only one, Milan–San Remo, remains. And he has told everyone that La Primavera is the biggest objective in the final years of his career. All eyes will be on him in 2020. But that doesn’t mean he cannot achieve his goal. Instinct is everything in San Remo. And Gilbert, now with the Lotto-Soudal team, has an abundance of that.

Philippe, one of the things that impresses me most about you is your longevity. I mean, you are 37 and you just signed a three-year deal with Lotto-Soudal. That is a longer contract than most neo-pros and you will be 40 by the time your contract comes to an end!

Yeah, I will have been a pro for 20 years at that point and there are not many guys that manage to race at that level for so long.

It’s really amazing. Some riders race until they are 40 as a teammate and road captain, but not at your level as a team leader….

Yeah, not many. I think only Alejandro Valverde and myself are in that kind of position. And before us you have to look back to a rider like Joop Zoetemelk to find a big rider capable of winning big races at this point in their career. 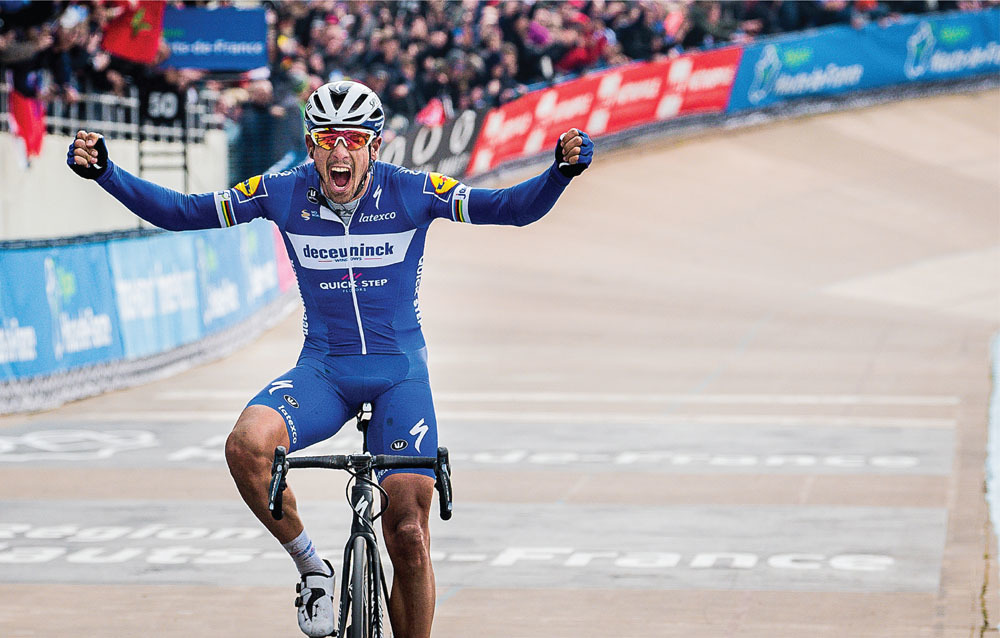 What is the secret?

Sure, it is not always easy to pack up and leave with your suitcase. But you have to realize there are a lot of people in the world that have to do that. But with that comes a lot of freedom. I can train anywhere. And when I am out riding, if I want to go left I can go left. If I want to go right I can go right. This is the freedom of cycling!

One of the things that stands out over your long career has been your ability to pick and choose objectives, to be able to prepare for them perfectly and to pick the best teams to make that happen. When you were focusing on the Ardennes classics you always had a great team around you and when you wanted to focus on the cobbled classics you were on the best team for them.

Well, I always have been very invested in my goals and bring other guys with me to make that happen.

It’s almost funny, because when you went to Quick Step, I don’t think a lot of people understood the real potential or real ambition you had to win races like Flanders and Roubaix….
Yeah, that’s true. I remember even after I won Flanders some people on the team, guys like team director Wilfried Peeters, still saying, “Oh I don’t know if you are good enough on the cobbles to win Roubaix.” But I was sure. I was convinced. I knew where I was going and what I was able to do.

Well, I remember one our very first interviews, perhaps our first when you were still riding for La Française des Jeux, you told me that Roubaix would be a race you would focus on later in your career.

Yeah, it was always in my head. Even when I was 21, I knew that one day I wanted to race Roubaix. But I wanted to focus on other races first, races that I think suited me better at that point in my career. But to think back over the years and to realize that almost everything happened as planned, well, that’s pretty incredible.

Well, winning Flanders in 2017 must have been a huge confirmation to that conclusion that, yes indeed, you could win the greatest cobbled races?

Yeah, but I always knew that I could win Flanders. I mean, even when I was focusing on the Ardennes classics, I still raced Flanders many times and twice finished on the podium. And I just figured that if I could finish on the podium when I was only maybe 90 percent that if I came to Flanders at 100 percent I could definitely win it.

You explained to me in an interview last year all of the calculations you were making on the road on your way to winning Flanders, how you were calculating the times splits and at what moment you decided to really go all out. Those sorts of calculations, the things that we call the science of racing, only come with tons of experience.

Yeah, yeah! One of the hardest things in racing is turning the race in the direction you want. And once you are able to do that, then you are in a position of power. That is exactly what we did that day. We accelerated early, on the Muur in Geraardsbergen, and made a big selection. After that it was much easier.

I remember Greg LeMond once said years ago that 90 percent of bicycle racing was reacting to other people’s actions, and only 10 percent is imposing your own actions.

Well, you did it once again last year when you won Paris–Roubaix, a race many thought you would never win. But you were so focused on it all spring. I could see for example in Ghent–Wevelgem how strong you were, but you were content just to work for Elia Viviani that day. It was like you were just doing your homework….

Yeah, I was just getting stronger in every race. And in a race like that I was happy to work for Viviani because he had the best chance to win. But secondly I was really working on my own shape. It’s always good to put your nose in the wind. Days like that you earn the confidence of everyone on your team and it is important to give to receive. It is like life really.

I remember that you attacked very early in Roubaix, perhaps to turn the race in your direction. But it was not so easy. It was a very windy day, with a lot of headwinds I recall, something that did not favor a long breakaway, I think.

Exactly. It was a crazy race. It was a very windy day. We had one of the fastest editions even with the headwind. The speeds were just really high. But there was a 25-kilometer section where I knew I had to make my move. If you look on the map, the race goes straight up, and then there is a moment, just after Orchies, where you go a bit left. And there is a 25-kilometer section of crosswinds, and I knew that if nothing happened there, it would be hard to make a selection. I was looking for good moves to follow, and when I saw Nils Politt, I knew that it was a good moment and I went with him. When you look back and watch it on TV, it doesn’t look like a great moment. We went after the cobbles on the main road. It looked like we went at a stupid moment in some ways, but that’s Roubaix. It came after some very hard sections and everyone was fucked. Everyone was in search of a moment’s rest. Everybody was on the limit and we just had that little moment to speed up. And suddenly everybody is looking around going, “Oh, what are we going to do now?” But that is Roubaix!

Once again, you showed yourself to be a master tactician. Obviously you have one more huge objective, Milan–San Remo. Everybody is talking about it and you still have three chances. It is a race you did well in early in your career, but do you still have the same explosivity that is so crucial there?

I think everything is possible. I have done so many different finals in San Remo, and so many have not been what I expected. San Remo is always a surprise. It is hard to explain. San Remo is hard but it is also easy. It is a very hard race to read. It is something that many people can do. There are maybe 80 to 100 guys that can be in the pack in the last 20 kilometers of Milan–San Remo, something that is impossible to imagine in Flanders or Roubaix.

Well, obviously, you raced Flanders many times and knew the course well. But you live nearby San Remo in Monaco. Do you ride the Poggio often?

No, actually. Sometimes it can be twice a week and then sometimes not for several months.

You just left a great classics team, Quick Step. But when you look at Lotto-Soudal, you have a pretty great team again, especially for Milan–San Remo, with John Degenkolb who already won the race and Caleb Ewan who was second just two years ago. You are going to have a lot of cards to play….

Yeah, and that is always better to have options, especially in a race like Milan–San Remo.

What would it mean to you to win that fifth monument?

Oh, it is hard to even imagine what it would be like. If I actually manage to do this one day, it would just be crazy.

Obviously, you will prepare to peak this year for Milan–San Remo, but what will that mean for the rest of the spring classics? Do you think you can still be in winning form in races like Flanders?