Riffing on one’s favorite desert island music always provides good fodder for conversation, and in the bicycle industry what better place to start than with Antonio Colombo, head of Cinelli bikes and Columbus tubing. Growing up in Milan in the 1960s, Colombo took over the family business with hesitation as he was firstly interested in modern art and rock music. But his position as an industry giant allowed him to expand his art collection and bridge the gap between the bicycle, art and music. Over the years music has been a recurring motif in his bike designs as he often makes references to songs or albums as he comes up with a new bike like, for example, Electric Mud (below)—Cinelli’s electric gravel bike named after the iconic Muddy Waters album. 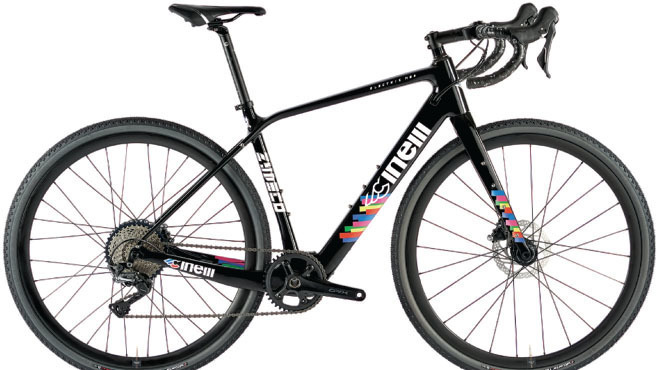 “When I was 17 in Italy, I would listen to Radio Luxembourg. It was the only way to hear English and American music at the time,” he told Peloton. “This music just showed me a different life. It gave me an escape from a world only focused on industry. I mean, just looking at the artwork of ‘Sgt. Pepper’s Lonely Hearts Club Band’ and you enter a whole different world. So, I was always going to concerts when the groups came to Milan. I saw Led Zeppelin in the middle of riots when they played at the Vigorelli Velodrome. I was there when Frank Zappa came, and I saw Jimi Hendrix in Milan too!”

Colombo was more than happy to be our first guest in this new series, Soundbikes, and while he admits that his choices were part of a certain time, he made some surprise picks.

“ALL ALONG THE WATCHTOWER”

I think when I am on a desert island I want to be mostly with classic songs. So, my first choice would be “All Along the Watchtower.” There are so many great versions, and it would certainly be difficult to choose between the Bob Dylan original version and the Jimi Hendrix version. But in the end, I would stick with Dylan. I have seen him many times and am really devoted to him. You must really study him. His music is like good literature. His lyrics are very visual, very descriptive. It is so rich, and “All Along the Watchtower” brings together the best qualities of his lyrics and his music.

I just love Neil Young, and I love this song. It’s a long song, a moving song, with many textures. And with both Bob Dylan and Neil Young you are in pretty good company on a desert island. You can take as much as you want!

“WHO DO YOU LOVE”

Again, there are many versions to this song, but I really love the long version by Quicksilver Messenger Service that was the B-side of their single “Happy Trails” if I remember well. It’s a psychedelic version of this classic song with elements of folk and Americana. There is just something hypnotic about that song. When I was young, I could listen to it over and over. It was a good excuse not to study and something I could see myself listening to over and over on a desert island.

Well, you will need to dance a bit even on a desert island and this song by The Rolling Stones just always makes me dance. It is a late classic for the band and it might not be the first choice for everyone when it comes to the Stones, but it is just so danceable. I listen to it often in the morning. It just makes me feel better and I will need some emotional rescue if I am stranded on an island.

How can you live without Bruce Springsteen on a desert island? And I just love “New York City Serenade,” especially the original version on his album “The Wild, The Innocent & The E Street Shuffle.” It starts with nearly a two-minute piano introduction that is like a piece of classical music. And the whole song is just so moving. The lyrics are wonderful, and it is nearly 14 minutes long and is just very emotional.

SONG YOU MOST REGRET NOT HAVING ON THE ISLAND?

“Anything by Lucinda Williams.”