France is home to the ultimate bike race on earth—Le Tour—and what a showcase it is! Not just of the most talented cyclists on the planet but also of a country steeped in tradition, bursting with culture, and blessed with landscapes as beautiful as they are diverse. No region typifies this more so than the dramatic eruption of mountains from the Mediterranean coastline along the glamorous Côte d’Azur, the French Riviera, that’s famed for, well, the rich and famous. Bathed in year-round sunshine, it’s hardly surprising that the likes of Saint-Tropez, Cannes, Nice and Monte Carlo (part of Monaco, its own microstate) are as well-known globally as their celebrity residents.

Cycling is no exception, of course. In particular, Nice and Monte Carlo are home to many of the sport’s biggest names—the former thanks to its general size, undeniable charm and proximity to an international airport; the latter thanks to its, let’s call it, economic advantages. Just 20 kilometers apart, the two cities share a wealth of world-class cycling routes right on their doorstep, illustrated perfectly by Col d’Èze, which separates the two, a climb made famous by Paris–Nice and traditionally featured in the final stage of the “Race to the Sun.” 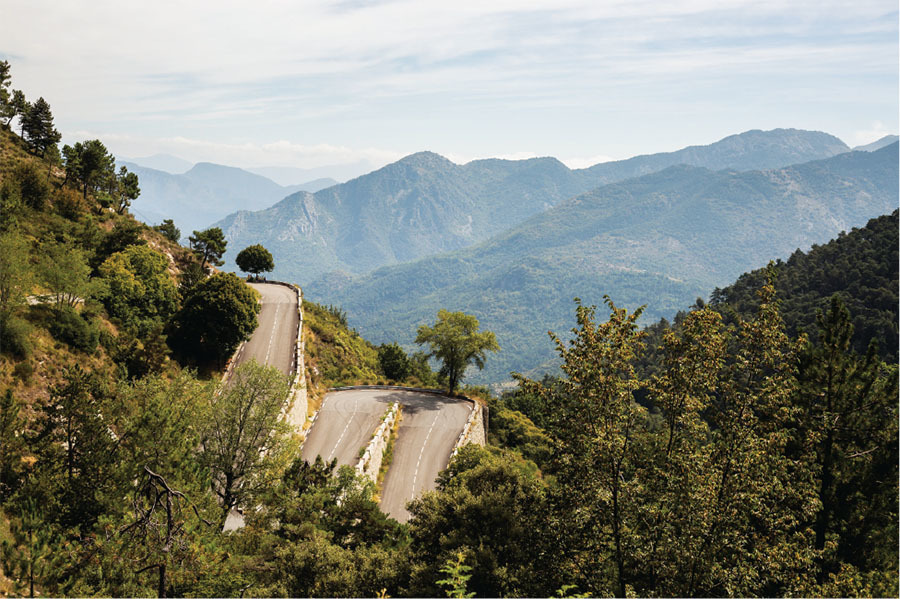 It’s this very route that adorns the walls of The Service Course, which recently opened in the heart of Nice’s historic old town, just a stone’s throw from the iconic Promenade des Anglais, the beachfront road that splits the city from the sea. To the uninitiated, The Service Course was created by Christian Meier in Europe’s other pro rider and cycling tourist hotspot, Girona, Spain. It’s a boutique bike shop specializing in the high-end and the hand-crafted, a description that applies to custom steel bikes as much as specialty coffee.

Until now, the running joke among cyclists was always that to enjoy a half-decent coffee you’d need to ride over the border into Italy. But with its arrival in the South of France, The Service Course has well and truly plugged the gap. Working with the likes of Aix-en-Provence-based specialty roasters MANA and espresso-machine makers of choice for any self-respecting cyclist, Rocket Espresso, the same exacting standards have been installed as those found in Meier’s Gironabased coffee businesses, La Fabrica and Espresso Mafia.

“Climbing into the clouds that were covering the mountains that day did not leave me with the incredible views that were most likely there, but it made it even more memorable; it took me back to being that young guy dreaming of epic days climbing misty European cols, riding the Col de Madone.”

Expansion to France, as well as the U.K. and Norway, has been funded by a star-studded group of friends from the peloton. Simon Gerrans now leads the business as CEO; and having spent a decade of his racing years living on the Côte d’Azur he knows the region’s training roads intimately. Likewise, you’d be hard-pressed to find a better tour guide than Ireland’s Nico Roche, who now races for Team DSM alongside fellow TSC investor and good friend Romain Bardet.

Gerrans, Roche and Meier know a thing or two about riding bikes, so who better to share their insights into what makes this spectacular corner of the world so good for doing just that.

“We used to have this go-to loop we loved doing from Nice, and we called it the Mini-Form Finder. It’s a fairly short loop, about two to three hours, but it had a bit of everything and you could work on all elements of your form. Starting from Nice, we’d ride east along the coast road, through Monaco, into Menton, over the Italian border and up a punchy little climb that was perfect training for the Ardennes classics. We’d drop down into a village called Latte and then follow the river valley road up to Olivetta San Michele, crossing back into France before descending to Sospel. From here, we’d do a long, steady climb called Castillon, about 20 minutes at 5- to 6-percent. Heading back to Nice, we’d stay on the smaller roads before joining the Moyenne Corniche, the road that is famously used in the final stage of Paris–Nice each year. It’s a loop that incorporates some beautiful scenic roads along the coast, short punchy climbs and a longer climb as well. You can tick all the boxes and do all sorts of intervals.

“We had a pretty good training group, with a whole mix of professional riders from a range of teams. I did a lot of my training behind the scooter, motorpacing, so your training was done at race speed. And it was a massive advantage having trained on these roads before having to race them. Particularly in the final stage of Paris–Nice, because position was critical in that stage of where you’re placed, not only for the climbs but also the descents. Good local knowledge was a massive asset. And San Remo is 50 kilometers down the road, so we would often ride the final climbs ahead of Milan–San Remo every year, so we were very comfortable knowing the climbs and which land markers to use for where you needed to be placed in the race at the key points.”

“There is a ride I do almost every week; for me, it’s the classic loop. Riding up out of Monaco through La Turbie, down to La Grave de Peille and then up to Col de Braus. Down into Sospel, up the Castillon and then down again to Menton on the coast. It’s just over four hours, depending on what time of year it is and how fast we’re riding. It’s about 2,500 meters of climbing, so it’s good but not too hard, with some amazing scenery and very little traffic.

“Most of our training is four hours, so it fits perfectly and it’s easy to extend or to shorten if needed. I usually ride it with Richie [Porte] and Michael [Matthews]; that’s our loop. There’s a really nice boulangerie in La Turbie called Ma Première Boulangerie. The coffee isn’t so good but the chocolate croissants are exceptional, so we stop there in the winter when we’re starting to ride again and still want to treat ourselves.”

“Col de Madone is a climb I had only ever heard of, a testing ground for the big names, while I was still only dreaming of the big European cols from back home in rural Canada. With all of my professional career in Girona and never racing over the climb it still stayed a mystery until I recently had the chance to check it off the list when visiting our new shop and café in Nice. Riding out along the coast through Monaco, the hustle and bustle had me questioning myself a bit, not the quiet roads I was used to, but the moment I turned inland and began to climb I seemed to leave it all behind. Climbing into the clouds that were covering the mountains that day did not leave me with the incredible views that were most likely there, but it made it even more memorable; it took me back to being that young guy dreaming of epic days climbing misty European cols, riding the Col de Madone.”

From issue 103, get your copy at pelotonshop.com