We visited Trek headquarters in Waterloo, Wisconsin, this past winter to interview Trek CEO John Burke for our Aerogramme podcast. Here are highlights from our conversation.

What were your first memories of the company and could you have ever imagined that it was going to bloom into this global, premier brand? Not back in the day, no. One of the first things I remember about Trek was when it just started and I was in about seventh or eighth grade. Some people came to the house from Trek to show my father some things, which I always thought was interesting, so I would hang around and drop in on the conversation. And then I remember going to Trek’s first unveiling, and I got taken out of basketball practice to go—which I was a little disappointed about. I liked basketball practice; but I got to miss half a day of school, which I was kind of happy about. So, I got to see the Treks; and I remember that Bicycling magazine was writing a big article on Trek—it was in Trek’s first year. We would drive to the drug store 5 miles away every night to see if it had come out. And do you know who the author was? Gary Fisher…. [laughs]

I’ve been to Trek’s headquarters a couple times now and it’s very clear to me that the roots of the company here in Waterloo are still very much part of the DNA of the company? Waterloo plays a big part in Trek’s identity, and the red barn plays an even bigger part; and I think that’s for a couple of reasons. One is the humility that my father had and my mother still does have. I think that’s just the Wisconsin roots. We focus on other people and not on ourselves. And we’re always trying to earn people’s business, and we also want to take care of our customers. That was a big message from my dad, and that message is really alive. I think the other thing the red barn symbolizes at Trek is: Don’t ever forget where we come from. And it’s a real point of pride. My dad saw something bigger. He had high hopes for Trek. So, one of the messages I have for everyone is: See something bigger than the barn. There’s so much more. 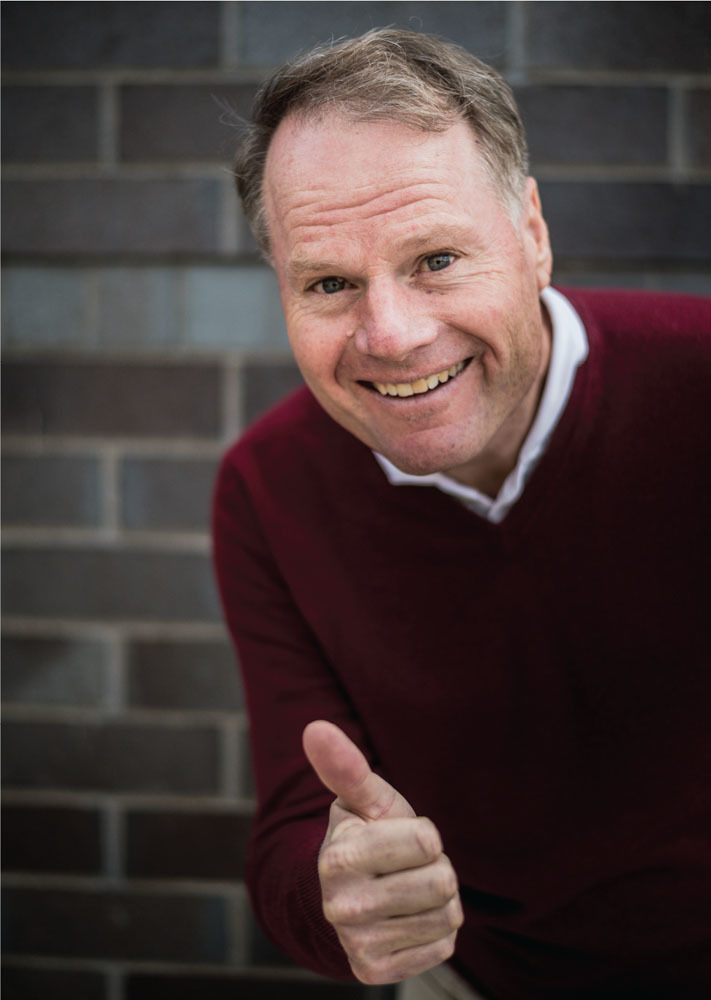 Trek is one of the only bike brands to be the title sponsor of a UCI WorldTour team. That’s pretty amazing in today’s market. What are the challenges, and what are the advantages of that sponsorship? One of the things we like to do at Trek is be different. If you do the same thing everyone else does, you just end up in a sea of sameness. So, we take a look at everything. Whether it’s a new road bike or a new race team, we always try to figure out how we can be different…. I think the biggest thing—the one word that stands out—is family. And it does that because we’ve always viewed Trek as a family. So, if you work here, you feel like you’re part of the family. Part of the company is an ESOP [employee stock ownership plan], so the employees own more than 25 percent of the business. There are great relationships here. People have problems—they get solved. People care, and that’s extended over to the team. So, for example, the team comes over here for training camp in late October; they get fitted for all their stuff; they do training here. I had them all over to the house one night—that was quite a party! It’s really great, because you see people you’ve developed relationships with and they represent the company, they represent the employees and they represent everyone who touches the Trek brand. I think it’s a really good relationship.

You have done L’Étape du Tour 15 times in France. What’s your absolute favorite climb? There’s so many. Ventoux, depending on the weather, is just a bear. The one side of the Tourmalet, the hard side, you get 5 kilometers from the top of that climb and you look up and you see people zigzagging and you go, “That’s not possible, that we’re going to go from here to there.” Then Alpe d’Huez, not the hardest climb, but the history behind it and all the turns and the views; that’s a really cool climb. And then there’s a climb in Santa Barbara called Gibraltar. And when you go all the way to the top you can ride a ridge road—on one side you can see the Channel Islands and an ocean and on the other you can see the national forest for hundreds of miles.

To hear the full interview with John Burke, listen to our Aérogramme podcast.