On March 21—a day that saw 651 Italians perish in the Covid-19 pandemic—the revered sportswriter, Gianni Mura, died at age 74 from a heart attack. His heart was one that beat with passion when he typed thousands of articles and half a dozen books about ciclismo, calcio and the other things he loved. For almost four decades, for the newspaper La Repubblica, he’d written a popular weekly column on soccer titled Sette giorni di cattivi pensieri (“Seven days of bad thoughts”); but the night before he died, from a hospital bed in Senigallia on Italy’s Adriatic coast, Mura called his editorial office to apologize. He told them he couldn’t file that Sunday’s column—not because he had nothing to write, but because the doctors treating him said he was too sick to work.

Gianni Mura was a journalist who had to experience things before writing about them. Always a person who looked people in the eye, he was a humble, polite giant with manners that belonged to another age. Mura was hellishly sharp, with a vibrant voice and a bright-clear intellect. He loved, ironically, the Tour de France much more than the Giro d’Italia, the pride of his home country. He was a fan of the Flemish-born ballad singer Jacques Brel, and on the road at Le Tour he’d sing along to Brel tapes playing on his cassette recorder. Besides singing, Mura chatted for hours every day with his traveling companion and fulltime driver of La Repubblica’s press car, Carletto Pierelli, whose encyclopedic knowledge of bike racing gave extra depth to Mura’s stories. For decades they hung together—Mura, Pierelli and the bike race—until the faithful man behind the wheel died at age 70 in 2009.

The first time I met Mura was at the Italian stage race, Tirreno-Adriatico, almost 20 years ago. I opened the door to a fish restaurant in San Benedetto del Tronto and saw him sitting in the corner. I knew immediately who it was. Big and happy, the avuncular, bearded author was telling jokes to the staff. Everyone was listening. My rule since that day was always: If you meet Gianni Mura at a restaurant, you’ve ended up in the right place. The last time I met him was at the Tour de France two years ago at a hotel-restaurant in the Pyrenees.

Mura, who first covered the Tour in 1967 for La Gazzetta dello Sport, came to France not only to witness the competition but also to write about the people, the country, its food and its wines. He saw the world through a prism of poetry and romance, always looking and listening—and then writing. Mura was the last journalist among the hundreds at the Tour to use a typewriter, still churning out words on a portable Olivetti Lettera 32 he’d first used in 1976. He typed almost without thinking. Words came easily to him, sharing his thoughts with his readers, using simple language yet often writing with deep references to classical literature. He wrote in both a straightforward and nuanced manner. And there were always hidden gems in his musings. 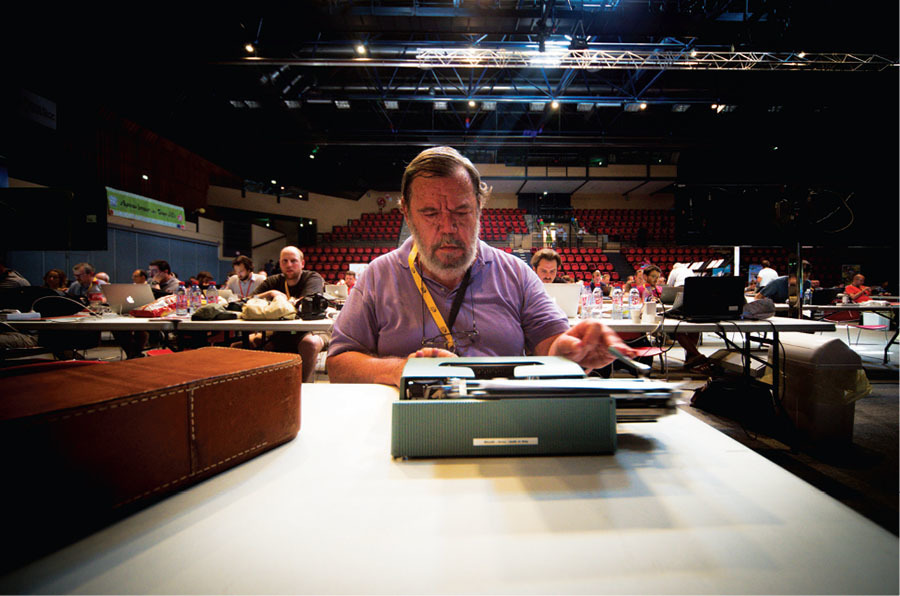 Mura was so respected at the Tour that otherwise strict French rules for the pressroom were bent, just for him. He often had a table outside the press tent so he could enjoy a cigarette or two and make as much noise as he liked on his typewriter. His routine was smoke, write, smoke, and then dictate his story to the newspaper on the phone before leaving for a restaurant. Or maybe a bar first.

After an intense, focused day of work Mura would hang loose. He believed that what was happening in the real world was important to his journalism. He didn’t clickbait or take sides in debates. As a journalist, he saw his job as recording life around the race as he saw it with his own eyes. Mura never pulled a punch. Like an Italian kitchen, he used real ingredients. He didn’t settle for the superficial, not just a dessert.

Mura was an everyday icon in Milan. He frequented restaurants where he had a permanent place, the same table. He had a whole room in one of them. He loved eating and drinking. It’s said that at the 1990 World Cup, to overcome the ban on alcohol (caused by the hooligans), a restaurateur served him wine hidden in a coffee-milk carafe. For Mura, drinking was the only topic that could challenge sports as essential to Italian life. His wife Paola was a gourmet food writer, and together they wrote a Friday column in La Repubblica titled “Eat & Drink.”

Mura was an accurate narrator with a perfect rhythm and a sense of detail most writers would envy. Bike racers and soccer players greatly respected him. They knew he knew what he was writing about. He’d been covering their sports for several generations before them. He observed things in the same way as L’Équipe’s cycling specialists Philippe Brunel and Pierre Chany. He was a journalist who wrote about things where they were happening and not from afar—like most people do today.

He traveled on stage races sharing the roads and hotels with the riders. Speaking of his early days at the Tour de France, he said that he’d sometimes have dinner with the riders and interview them in their rooms. “I once interviewed Raymond Poulidor while he was in his bath,” Mura said.

Mura’s words made bicycle races come alive for those who cared about reading; his unique way of telling a story was in a special class and was printed in a newspaper that always insisted on the highest literary standards. His words could be hilarious, politically incorrect and cleverly ironic, and he could complete a sentence so easily and accurately that everything was clear without losing its mystery. And what else is there to do than that?

His career as a journalist didn’t start out so well. After serving an internship as a high school student with La Gazzetta, Mura remembered using all his creativity in an interview with AC Milan’s new Brazilian winger Germano; the editor rejected the article, saying that for all he cared the footballer could make a paper hat with it. It didn’t happen again, and Mura grew into his profession after befriending a later editor at La Gazzetta, Gianni Brera. They discovered a common love for a writing style, literature and good food. They later moved to La Repubblica, sharing assignments, where they were recognized as the last great sports journalists of a golden era.

Mura’s love for sport was perhaps only exceeded by the respect he showed to his colleagues. The piece he wrote about Brera, after his teacher and travel buddy was killed in a car crash in 1992, is one of the most beautiful lyrical essays I’ve read about friendship.

In addition to being a journalist, Mura wrote thousands of postcards, sent from the cities and countries he visited. They were sent to his friends…to the vegetable seller in the market at home…and to the coffee shop in Milan where he read the morning papers. One of my good friends has told me that Mura also asked for the addresses of people who had praised an article, because he then wrote a card to them too.

Mura passed away on a sunny Saturday morning, the day that Milan–San Remo should have been held—had the coronavirus pandemic not gripped his country. In a springtime that never felt more lonely, there were no racers on the Via Roma for the tifosi to embrace, and no one to celebrate the life of their most popular scribe.

If proper funerals were allowed in Italy during the crisis, a lot of people would have come to honor Gianni Mura. His friends would have come from all parts of Italy and France. Journalists and cyclists. Chefs, sommeliers, bartenders, waiters…and many, many more. Perhaps everyone would have cried and said good-bye to someone who had precisely told their stories in snapshots or stayed close over long years of friendship. They’d remember his laughter and maybe some passages from his books or columns. After the Covid-19 lockdown ends, his closest friends can meet in the heart of Milan to eat a full-bodied Italian meal, drink some glasses of finest Barbera, tell stories about their friend…and maybe smoke a cigarette or two outside.

Once in an interview with a French newspaper, Mura was asked how long he could continue writing stories on his 40-year-old Olivetti. He replied: “Until I can’t find a hotel late at night and drive to the next stage. But part of the journey continues even after I stop. Then the memories will glow inside of me and warm me when I’m cold.”

Rest in peace, Gianni Mura, a great, friendly, talented and most true human being.