When it comes to the grand tours it is relatively easy to identify where a three-week race will be won—look first to the high mountains and time trials. But it is easy to overlook where the race will be lost. And in this year’s Giro d’Italia, one of those places will most certainly be stage 11 from Perugia to Montalcino. On paper, the stage is not overtly difficult as the 162-kilometer course loops its way through the rolling hills and wine country of Tuscany. So far so good! But when it was announced that the stage also includes more than 35 kilometers of racing over the white gravel roads made famous by the Strade Bianche classic, the stage suddenly took on a new face.

Sure, the Giro has included sections of the white roads on occasion, but not with such intensity. The four sections are packed into the final 70 kilometers of racing that heads into and around the ancient hill town of Montalcino, promising to wreak havoc on the peloton. 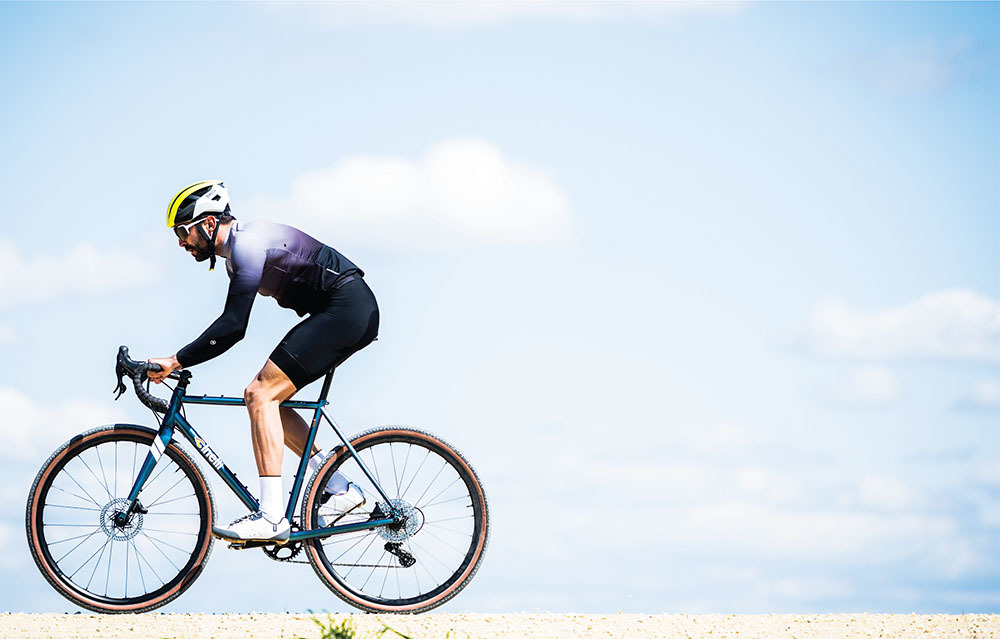 “Gravel is just so much more fatiguing than the road. There is no place to hide,” said Moreno Moser as he reconned the upcoming stage. The nephew of Francesco Moser and winner of the 2013 edition of Strade Bianche, who retired from the professional peloton at the end of 2019, still rides as an amateur for Team Cinelli Smith. And he jumped at the chance of returning to the scene of one of his greatest triumphs. “Riding on the gravel is just so much more individual. You cannot sit on the wheels or in the pack like you can on the road. If you are having a bit of a bad day, you will really suffer.”

Leaving Montalcino in the morning, we made our way toward Torrenieri where the first gravel section starts 92.8 kilometers into stage 11. Turning left out of town, the road on this 9.1-kilometer gravel section to Buonconvento immediately climbs. “It’s always special to come back to these roads. And every time I leave an asphalt road and hit gravel it makes me think of the Strade Bianche and what it is like to be in the bunch,” said Moser, as he looked over the opening meters of what will be stage 11’s first gravel section.

“The thing about hitting gravel is that no section is the same,” he continued. “It’s always so crazy, because everybody wants to be at the front. The dirt roads are smaller so there is always somebody crashing, somebody screaming. It was always very emotional. Every time I hit gravel, I think about the noise of carbon exploding, of wheels going everywhere.”

This first section climbs steadily until it hits a ridge of one of the region’s rolling hills. For those that have time to look around the views here are stunning, but for those racing in the Giro there will be no sightseeing as such hilltops are easily exposed to winds that can quickly complicate matters, especially if traction is made unstable from dust and gravel or, in the case of rain, mud. “In the Strade, there are always a couple of sections where you are really exposed to the winds, and when the roads are slippery it is just crazy. You don’t have control of your bike and you just see riders flying away, off the road.”

Coming off the first section we made our way to the second one, the longest and quite likely the most difficult. Section 2 starts after a sharp downhill at kilometer 109.8 and grinds its way up the Passo del Lume Spento, a daunting 13.5-kilometer stretch of brutal gravel riding. “We’ve done this section in the Strade Bianche and it’s always a hard section,” Moser recalled. “I remember it in the first years when I won it, but I really remember it a couple of years ago when I was suffering. It is just really, really hard.”

The most intense climbing comes in the first half as the road snakes its way up and out of a valley in a series of switchbacks through the village of Castiglion del Bosco. Visually, it lacks the postcard quality of the opening section, but for the riders it promises to be one long grind. “This is the hardest of the four sections, for sure. I think in the Giro you will definitely see some big attacks here,” Moser commented. “This is where the race will really start in my opinion. It will really explode. Perhaps a team like Astana, a team that likes to race aggressively, will try something here. If not, any guy that is not sure if he is strong enough to win in the final needs to try something.”

Finally reaching the Lume Spento summit, the riders will then attack a long descent, passing through Montalcino itself, before hitting the third section at Castelnuovo dell’Abate. And while this 7.6-kilometer third section may not be the most difficult, it opens with a technical descent that promises to offer challenges of its own, before making its way up a long, exposed climb. “The thing is that each section just gets harder and harder as you approach the final,” Moser said. “You feel the pain in each hand, everywhere. And if you are suffering, you can only watch as the gap grows between you and the guy in front.”

Exiting this section after 143.7 kilometers of racing, the riders will have only 5 kilometers to recover on a steep downhill before hitting the last gravel section of the day. And while it is the shortest, the pace promises to be high as the pack races toward the finish. “The pace will definitely be fast here,” Moser said. “But there is still one final climb to come. That will change things a bit.”

Reflecting on the likely outcome, Moser said, “A stage in the Giro will be different than a real Strade Bianche race. I think the pack will stay together longer.” And as Moser looked back over the four gravel sections he’d just ridden, he agreed that, while this year’s Giro will not be won here, it could well be lost. “The thing is, riders with a big team can just put their team at the front and stay safe, or at least safer. But anybody having a bad day, or a GC rider without a big team, can really get isolated quickly. There just will not be enough room on these roads for everybody to be at the front. And if you get isolated, well, you can be in for a really difficult day.”