The Loire Valley is a tough destination to beat as far as bucolic cycling destinations go. As the longest French river, the Loire originates in the Massif Central—where this year’s Tour de France features one of its very steepest climbs on stage 9: the Category 1 Mur d’Aurec-sur-Loire that has 16- and 19-percent pitches. Much farther downstream, undulating climbs along the river valley make for eyepopping views, especially around the vineyards surrounding the town of Savennières, near Angers.

Just before a country road called the Chemin de la Rocheaux-Moines, which takes a swooping downhill toward the Loire, you pass the Château de la Roche-aux-Moines, home of an ancient vineyard whose wines were once praised by “The Three Musketeers” author, Alexandre Dumas. Today, it’s home to a modern icon who makes the estate’s wines. Biodynamic wines. His name is Nicolas Joly, who derives his inspiration from biodynamics pioneer, Rudolph Steiner.

Steiner was an Austrian intellectual and philosopher who laid the groundwork for the biodynamics movement in the 1920s with a series of lectures on agriculture. The aim of those lectures, and Steiner’s philosophy called anthroposophy, was to explore the energies that are not necessarily scientifically observable in plants and livestock; and by balancing those energies in the most natural way he showed that you can improve the health and life-sustaining elements through farming practices. Steiner’s proposed approach was the first modern foray into organic farming.

These days, biodynamic principles are applied in over 50 countries and in a variety of farming methods from apple growing in Washington state, to cotton farming in Egypt, but where Steiner’s esoterica may find its most zealous devotees is in the world of winemaking and viticulture.

Similar to sustainable or organic farming, the tenets of biodynamics are an emphasis on crop diversity, an eschewing of chemicals for weed or pest control and building a closed system—so that the animals on your farm are providing the compost, as well as the weed and pest control for the crops that you’re growing. Where biodynamics stands apart is in its adherence to celestial and terrestrial forces, and the application of special “preparations” applied to the soils to promote their health.

Joly was a worldly product of a longstanding winemaking family, growing up on the family’s estate on a hillside above the Loire River between the tiny village of Épiré and the town of Savennières. It is a region where wine growing goes back for centuries, and the Joly family property is among the region’s oldest. Joly went off to Columbia University before becoming a successful investment banker in both New York and London. In 1977, at age 32, he decided that he wanted to go home and help his parents by growing and making wine on the family estate, Coulée de Serrant. 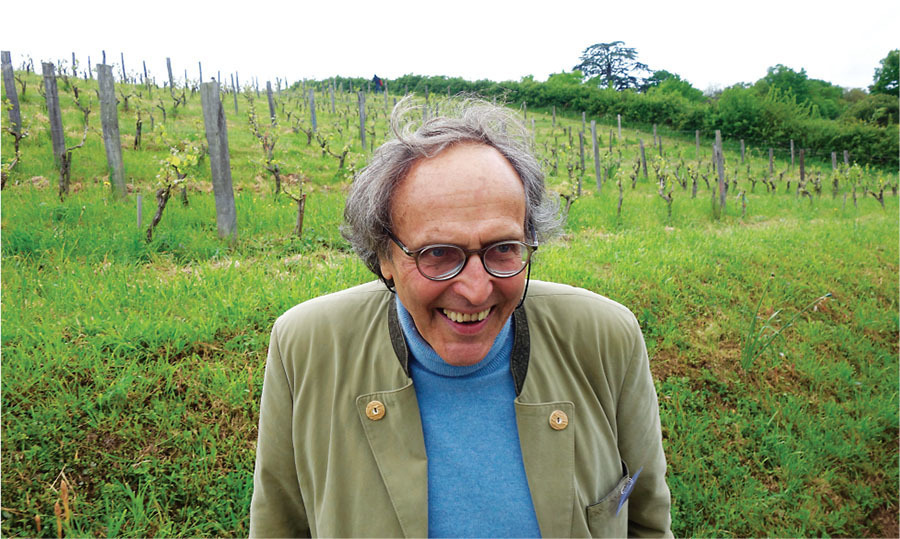 His mother had been running the estate, and things were fine, but Nicolas hoped to inject a bit of modern technology into the old estate, which had been planted by Carthusian monks in 1130—almost 900 years ago! He figured that by using herbicides alone he could save the family more than 10,000 euros a year. So in hoping to improve things Nicolas began pouring what he now calls poison into the soil of his family’s storied estate vineyards. “It was evident in just a couple years that I had gotten it wrong,” he tells me as we stride along rows of the budding Chenin Blanc vines—the only grape allowed in wines labeled with the Savennières region.

Following his mistake, Joly quickly made a course correction, picking up a book on biodynamics and diving headlong into the new farming approach. He uses the word “fate” a lot to describe the circumstances, both of his turn toward biodynamics and the production of a wine that has become among the most sought-after in Savennières and the greater wine world. The 74-year-old Joly still farms the estate with his daughter and has an exuberance those half his age would envy. And he has become perhaps the loudest voice in the world for biodynamics, at least in the wine world, authoring multiple books and lecturing the world over.

In 2001, Joly founded Renaissance des Appéllations, a group of more than 170 wine growers from 13 countries, who carry on the work of biodynamics winemaking and hope to change the world for the better by advocating that we take seriously what we put into our bodies and how those things are grown and made.

This article originally appeared in issue 87.

Also check out Tuscany’s Via Clodia