The Giro d’Italia is step by step unveiling the route for 2022. The latest reveal is the six hilly stages—in between flat days for sprinters and steeper days in the mountains for climbers—from the race route that could witness a breakaway, solo attack or a bunch sprint.

Here are the six stages: This is a truly ‘mixed’ stage through the Calabrian-Lucanian mountains with an overall gradient worthy of a Dolomite stage. The start along the sea is the only flat section—or at least, partially flat. After Maratea the sequence of demanding climbs – some more than others—is uninterrupted. The riders will climb the Passo della Colla, which leads to Lauria, where they will tackle Monte Sirino, an old acquaintance of the Giro, which the riders will meet again after 23 years. After crossing Viggiano, the group will climb the Montagna Grande di Viggiano, a very demanding climb to reach Potenza after the last ascent of the Sellata. 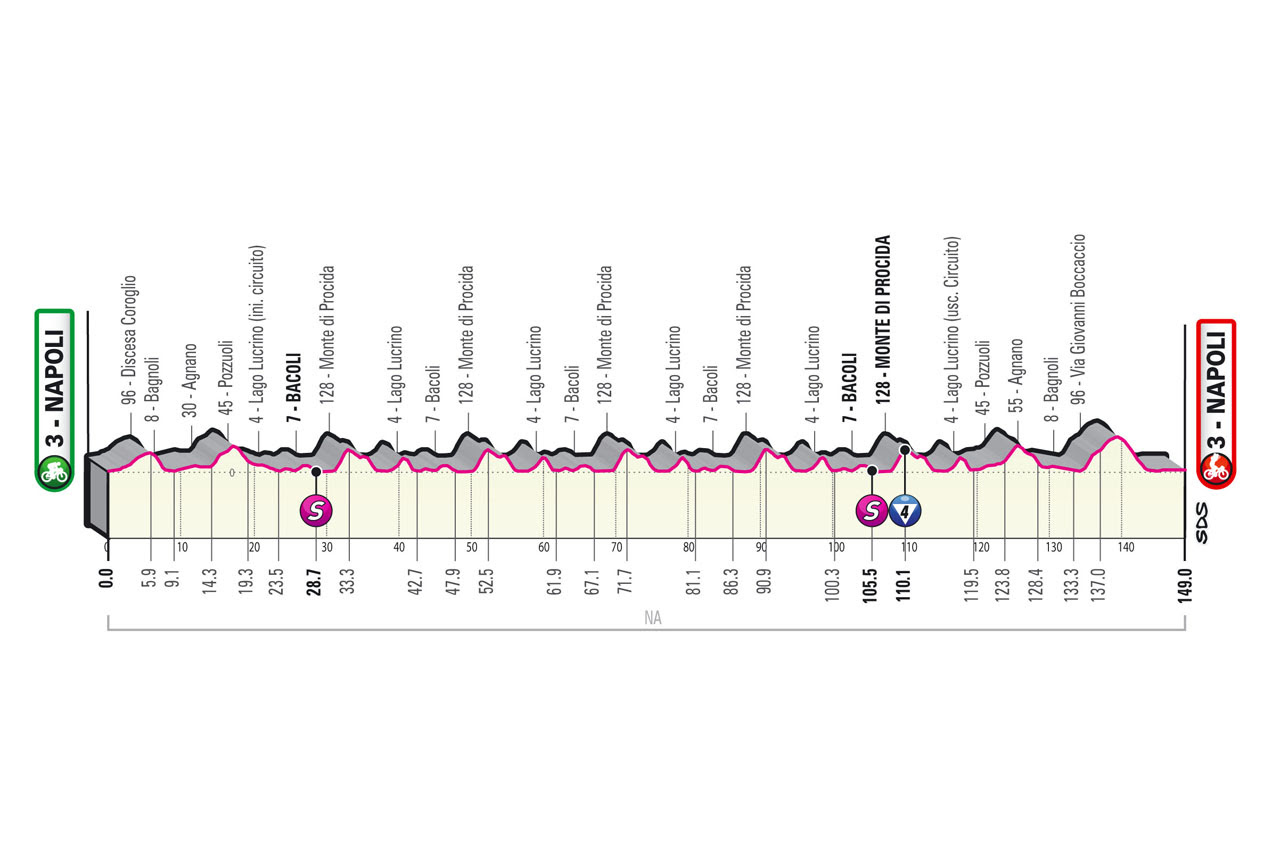 A short and intense stage between the capital of the Campania region and the Phlegrean peninsula. From Naples the race heads to Bacoli and begins a demanding circuit of around 19km between Bacoli and Monte di Procida to be covered five times. At the end of the last lap, the race returns to Naples where on the seafront of Via Caracciolo, the finish line will be located. Expect a reduced group for the final sprint. 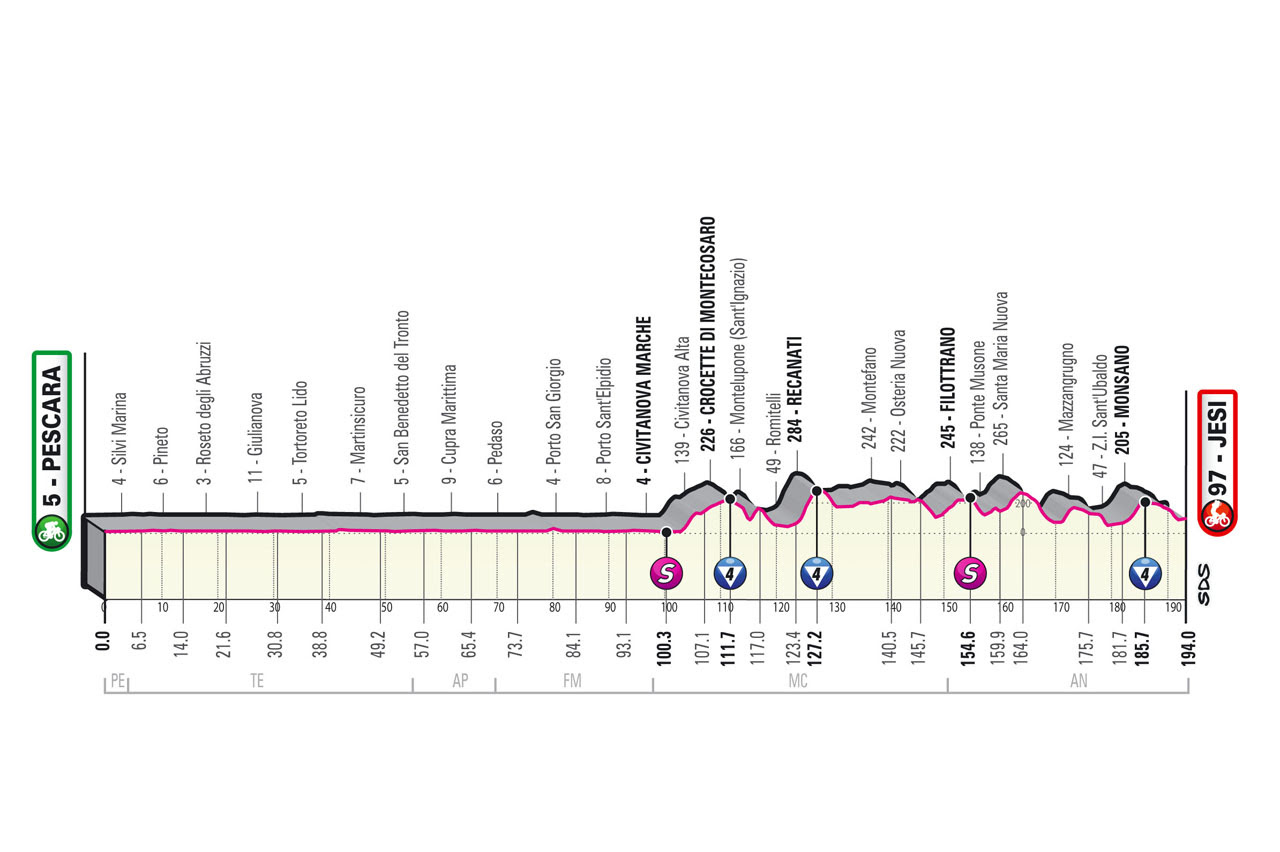 A mixed stage with a flat and coastal first part and a second that undulates along the Muri of the Jesi area. After Civitanova Marche, there are no obvious opportunities for recovery. The riders will climb Civitanova Alta, Sant’Ignazio di Montelupone, Recanati, Filottrano, Santa Maria Nova and Monsano. These are all demanding climbs, with some very steep sections, which will surely create a select group that arrives in Jesi for the final sprint. 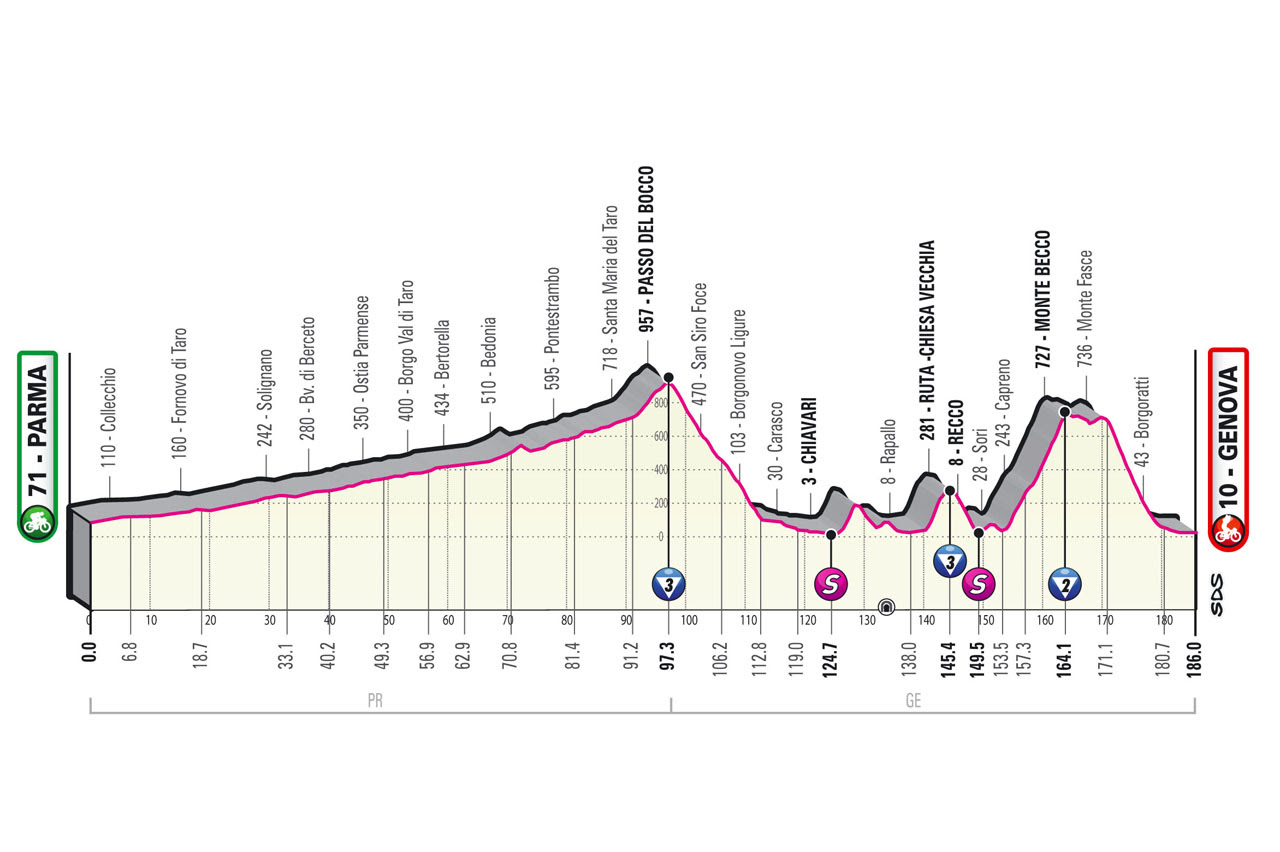 A medium mountain stage suitable for breakaways. The first part of the stage tackles a constant climb until the riders enter Liguria via the Bocco pass. A quick descent to Chiavari follows and, once the coast is reached, the biggest challenges begin, with the Ruta being tackled this time from the side of Chiesa Vecchia and above all Monte Becco, an unprecedented and very demanding climb. Connected with Monte Fasce, both ascents will thin out the small group that subsequently will arrive in Genoa to compete for victory. 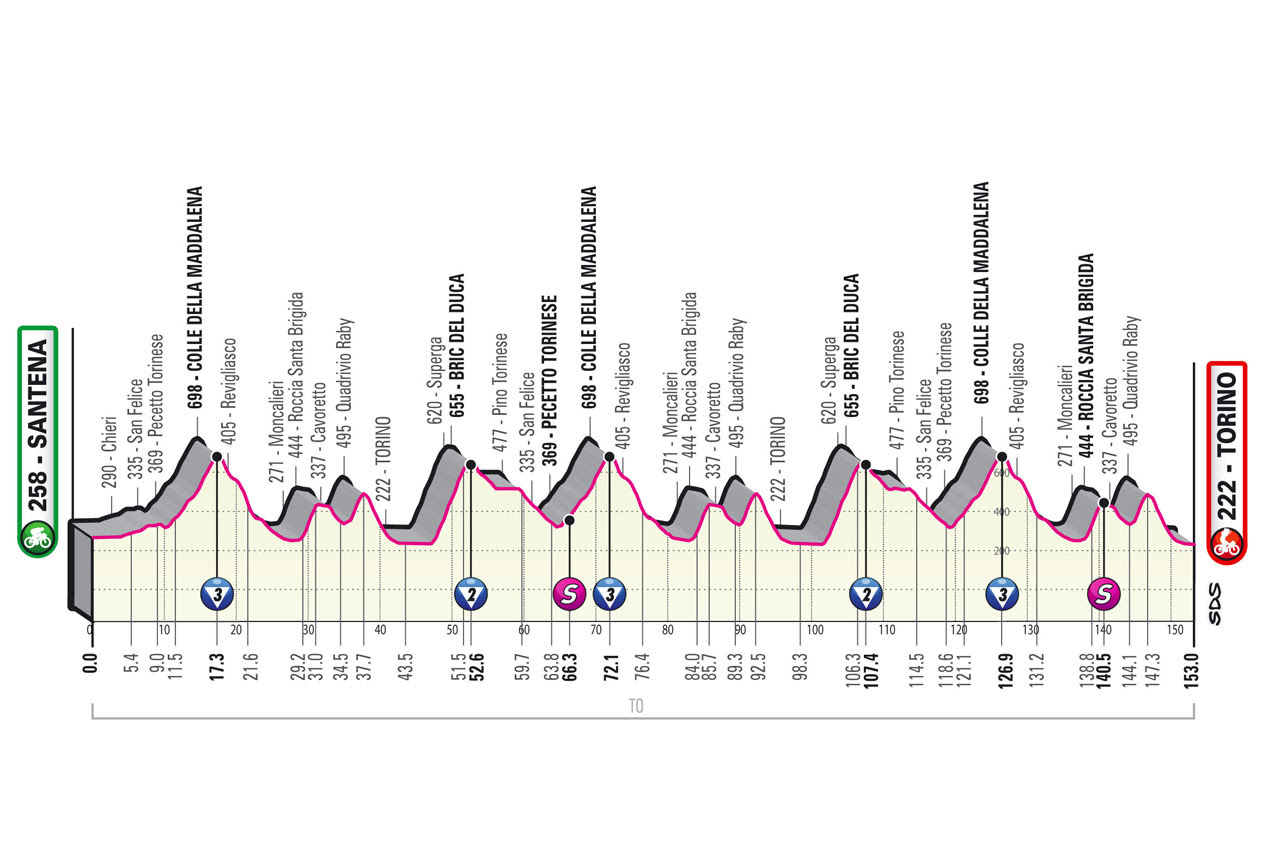 A short and very intense stage without a moment’s respite. The overall elevation accumulated in relation to the kilometres covered resembles most closely that of an alpine stage. The first ten kilometres from Santena to Chieri are the only ones of the day that are not uphill or downhill. The peloton will ride two and a half times on a circuit that includes the climb to Colle della Maddalena, and after, the climbs of Moncalieri and Santa Brigida. It passes the finish line at the Gran Madre and climbs the Superga climb to arrive again at the foot of La Maddalena and start again. In total, Superga will be climbed twice and Maddalena and Santa Brigida three times for a very intense finale. 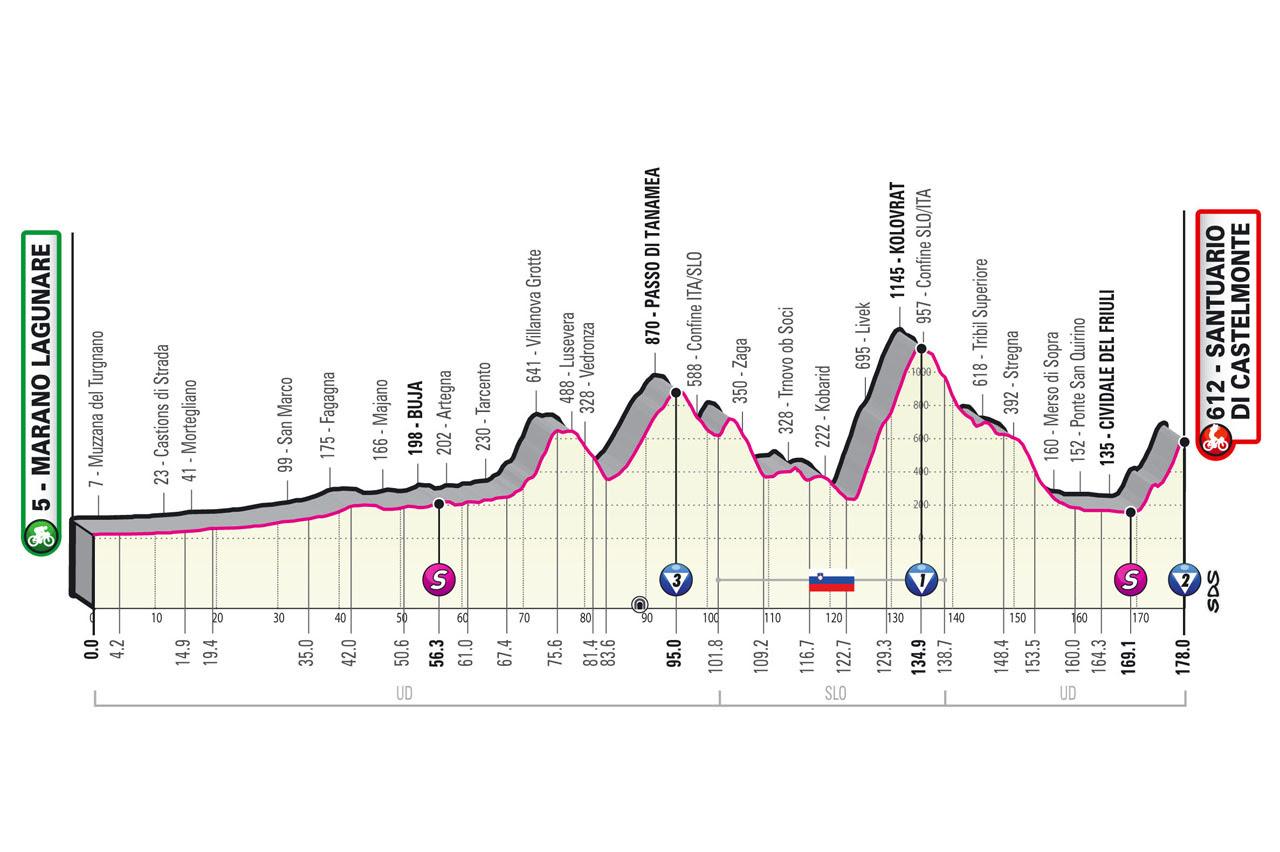 A mid-mountain stage that begins from Marano Lagunare to climb along the lowlands up to the morainic hills of Udine between Fagagna and Majano. After crossing Buja, the race reaches the Julian Pre-Alps with the Villanova Caves followed by the Tanamea Pass. The riders will enter Slovenia through the Uccea pass, which leads directly to Kobarid (well known in Italy as Caporetto). This is where one of the new climbs of the Giro 2022 begins: Monte Kolovrat, 10 km at almost 10% (the gradient drops off due to a small period of respite halfway up the climb). A long false flat then slowly descends to return to Italy. From Cividale del Friuli the climb that leads to the Sanctuary of Castelmonte, which has dominated the Cividale area for almost 1000 years, begins. 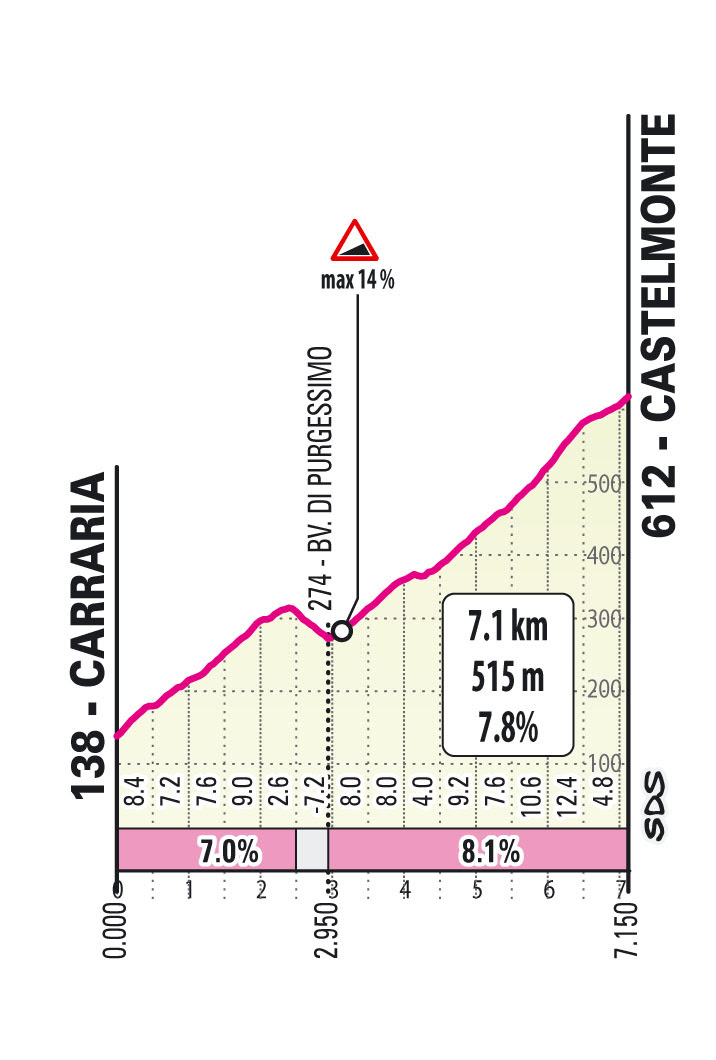