For many, winning the world road race championship is the most distinctive prize in cycling, accented by the winner wearing the distinctive rainbow-striped jersey for the following year. This bestows a certain sense of nobility on the champion in every race or on any ride. Historically it is also one of the most open races and victory can fall to an outsider, a team captain or even a support rider. With the road worlds contested in a national team format, team unity can be evasive because the riders spend the rest of the year on opposing trade teams, only to come together for a single day, enhancing the race’s unpredictability.

Each rainbow-striped jersey has its own story. We visited the wonderful KOERSMuseum in Roeselare, a town tucked away in Western Flanders. The town itself has produced numerous world champions, including the legendary Freddy Maertens, while the museum possesses a tremendous collection of these prized items. Here are 11 rainbow jerseys that the museum shared with us. 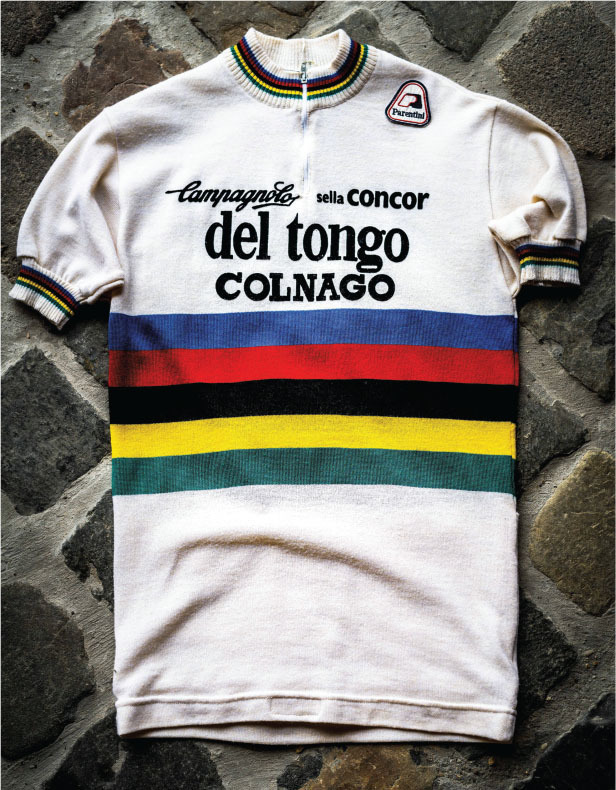 Giuseppe Saronni’s distinctive Del Tongo-Colnago jersey, one of the last produced in wool, hails from the 1982 race in Goodwood, England. Saronni’s victory came as little surprise. He was a heavy pre-race favorite and had the support of the powerful Italian national squad. Behind him, however, a virtual American revolution was stirring as Jonathan Boyer accused an up-andcoming Greg LeMond of chasing him down on the final climb. Most observers are skeptical that Boyer’s attack would have earned him victory, but he accused LeMond of treachery after the U.S. youngster’s lethal counterattack earned him the silver medal. Regardless, with the dust long since settled, most agree that the ’82 worlds saw the dawning of a new generation of American cycling on the international stage. But on that day in Goodwood, the glory still belonged to the Italians when Saronni scored one of his greatest victories.

This is the time trial version of the rainbow jersey worn by Belgian Claude Criquielion. Whenever Criquielion’s name is mentioned in Belgium, most people have visions of him walking his bike across the line in tears after crashing with Canadian Steve Bauer in the final sprint of the 1988 worlds in Belgium. And in some ways people have forgotten that the Belgian had already won the title four years earlier in Barcelona. This jersey is from the collection of Noël Grégoire, a Belgian cycling collector, who has graciously loaned his entire collection to the KOERSMuseum.

They called him The Emperor, and Belgian Rik Van Looy remains to this day one of the greatest-ever cyclists. The winner of nearly 500 races, he was an international star in the world of sport. He twice won the rainbow jersey, in 1960 and 1961, and he almost won a third in 1963, only losing a close sprint to his young Belgian teammate Benoni Beheyt in what was a national scandal at the time. But this jersey from Van Looy’s first title, won on East Germany’s Sachsenring circuit in 1960, is one of the most pristine examples of a rainbow jersey from an era before sponsors’ names were included.

The Deceuninck-Quick-Step team boss Patrick Lefevere never won the world championships, but he is from Roeselare and remains a faithful donor to the museum. At the beginning of this year, he donated a nice collection of jerseys. This is one of them, signed by Kwiatkowski. At the museum, you can also see the bike the Polish champion rode to victory, complete with the dust and dirt from the 2014 worlds in Ponferrada, Spain.

During the 1960s and ’70s, many famous riders came to Roeselare to seek out a guy named Camiel Verbrugge, who was a cycling shoemaker. American Eric Heiden came here as did legends like Raymond Poulidor, Patrick Sercu, Roger De Vlaeminck and Jan Raas. Gerrie Knetemann was also a customer and he donated one of his rainbow jerseys to Verbrugge as a token of his gratitude for his custom shoes. This long-sleeve wool version, donated by Verbrugge’s son Wilfried, is one of the most elegant and epic versions of the rainbow jersey at the museum.

Another jersey from Noël Grégoire’s collection is this one signed by Joop Zoetemelk, who remains the oldest rider to win the world road title at the age of 38 years and 10 months—five months older than 2018 champ Alejandro Valverde. Long considered Eddy Merckx’ and Bernard Hinault’s greatest rival in the grand tours, Zoetemelk built his reputation as a stage racer. But at the 1985 worlds in Giavera del Montello, Italy, he surprised the medal favorites Moreno Argentin and LeMond with a late, powerful solo attack.

French cyclist Catherine Marsal was one of the great female cyclists of her generation, winning no less than four rainbow jerseys—twice as a junior (road, track) and twice as a pro (road, team trial). In 1990 she became the world road champion in Utsunomiya, Japan. Marsal donated this jersey to the KOERSMuseum, one that she wore during the 1991 Canadian Tire Classic that still has the race numbers pinned to it.

The 1988 worlds in Ronse, Belgium, will forever be etched into the memory of Belgian cycling fans, for it is here that national hero Criquielion appeared destined to win a second title in front of his own fans—until he crashed in the final sprint with Bauer. Instead, it was the then littleknown second-year professional Italian Maurizio Fondriest who took top honors. Fondriest was unheralded at the time, but he would go on to be one of the top professionals of his generation, winning classics like Milan–San Remo and the Flèche Wallonne.

This jersey was dedicated to Deceuninck team manager Lefevere by German time trial ace Tony Martin, who won the TT title four times between 2011 and 2016. The long, heartfelt message written on the front of the jersey shows how grateful Martin was to Lefevere and his team when he quit Quick-Step at the end of the 2016 season. This was a personal gift to his former boss.

One of Belgium’s most popular cyclists, Freddy Maertens also hailed from Roeselare. A gregarious champion with a big laugh and a huge sprint, Maertens won as many as 50 races in a single season. He worked at the museum for years and donated this classic rainbow jersey from his first world title at Ostuni, Italy, in 1976, a feat he repeated in 1981.

One variation on the rainbow-striped theme is found here in this world championship jersey awarded to Dutch rider Teun Van Vliet as 1979 world junior track champion in the points race. For many years junior riders were awarded this version of the rainbow jersey and in the same year Van Vliet earned his track victory LeMond won the junior road race.

From issue 106, get your copy at the Peloton shop